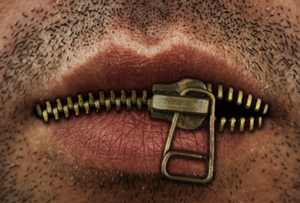 What do you think the world would look like if everyone told the truth?  It would be wild, right? Imagine honesty falling out of important zipped lips in the highest places in the land….

If the President of the United States could tell the truth, he would say: “I made a mistake. I led the American people down the wrong path because I really don’t have as much power as everyone thinks I do. I’m a pawn in a global game too, and honestly I would like Americans to begin to take more responsibility for their lives and stop trusting governments and corporations. If you think about it, we haven’t ever earned your trust over any substantial amount of time; we’ve been lying to you almost since the beginning of our republic….so it’s time you stop giving us so much power; that way you won’t be quite so disappointed with us when we fail you…We’re not your parents and you really do need to grow up.”

If the Executive VP of Monsanto could tell the truth, he would say: “Who am I kidding? I know that forcing every farmer on the planet right now to buy our seeds exclusively (or face fines, punishment etc etc) is maniacal, psychotic and yes, pretty evil in the classic sense of the word but it works for us. And even though having to buy new seeds every single year makes no sense to anyone with a brain in their head, lawmakers believed us when we told them it was a great idea so now we can take small farmers to court if they violate our rules. See, if we told anyone the truth, we would have never gotten this far. We may look at the world as a population of useless feeders, but honestly, what else do you want us to think when you don’t care what kind of crap you put in your body? So who says we can’t be honest? And if we lie to you, it’s not our fault. We don’t want you to know we’re trying to take over the world’s food supply.”

If the CEO of CNN/CBS/Disney/NewsCorp/ComCast/Viacom/ClearChannel could tell the truth, he would say: “Why am I always called on to explain the ‘integrity’ of news telling…of ‘journalism’? Not that I care if I have to stretch the truth a bit with my answers, but none of you people pay my salary. I know who I need to please, and it’s not you.

I find discussing integrity very annoying and counterproductive. People just don’t understand how complicated the news is for us. We can’t tell you the truth. You have no time and patience for the truth. And even if you did, we’d have no room for commercials or station breaks or anything for goddsake. If we told you the truth, people in very high places would get mad at us. They depend on us to say what they want everyone to hear. Besides, the truth is complicated, and frankly, we know most of you are idiots. And even if you’re not all idiots, we like our mansions, our maids, our private schools; and all those wonderful things will stay in our lives if we are willing to say what the bigger boys tell us to say. It’s not our fault. People like me are not like the rest of you. It’s just that way. We can’t help it.”

If the spokesperson for Lilly Pharmaceuticals could tell the truth, he would say: OK, so being a little careless with drugs is not the smartest way to win the hearts and minds of the people who buy them from us, but you know, we have also had to pay out BILLIONS of dollars when one slips through the cracks, like Bextra. It hasn’t been all rosy for us either! We have to send a lot of doctors on vacation to get them to prescribe these things; and then get our friends into the FDA to approve them, and all this is very, very expensive. Sometimes a life or two falls through the cracks, but what is that in the big picture? After all, we spend billions of dollars to develop a drug in the first place! So what if we’re not really solving any problems long term – no one cares about the long term. We’re just giving people what they want: zero personal responsibility for their lives and a very quick way to ignore whatever it is that’s bothering them at the moment. Since when is that so bad? We’re a feel-good company, isn’t that enough to cut us a break? And if once in a while, we screw up by killing someone, we don’t hide it. Just read the label: “May Cause Death” – you can see it for yourselves. We’re working every angle. Believe me, we know what we’re doing. •

More people than ever are aware what’s going on outside of mainstream media; aware of what mainstream media is unwilling or not allowed to tell them. It would be refreshing to hear someone in a position of “responsibility” recognize this and finally show us the respect we deserve – fess up to the mistakes, the coverups of those mistakes and the coverups of the coverups (so that it could seem that there was nothing to coverup in the first place). In the meantime, here’s my favorite watchdog sites and some of the bravest journalists around:

http://jimmarrs.com/ (The journalist who wrote the book that the movie “JFK” was based on)