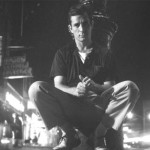 "My French Canadian roamin-eyed blue-eyed bum, my movie star-lookin wordsmith extraodinaire"…Whatever dimension you're hanging out in tonight, Ti Jean, here's a funny poem I wrote to you. Since my theory is that the internet is a kind of inorganic (?) nervous system, even though you're no longer on this planet, I think you’ll get it. I love you. X what I would have called him I wouldn't want to sound pretentious. I would have said "my friend Jack" if people asked me about him. Actually, I … END_OF_DOCUMENT_TOKEN_TO_BE_REPLACED