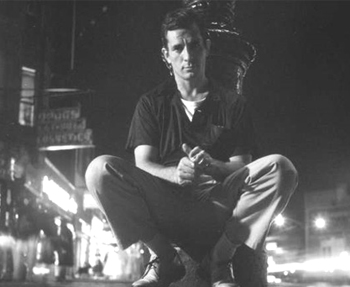 “My French Canadian roamin-eyed blue-eyed bum, my movie star-lookin wordsmith extraodinaire”…Whatever dimension you’re hanging out in tonight, Ti Jean, here’s a funny poem I wrote to you. Since my theory is that the internet is a kind of inorganic (?) nervous system, even though you’re no longer on this planet, I think you’ll get it. I love you. X

what I would have called him

I wouldn’t want to sound pretentious.
I would have said “my friend Jack”
if people asked me about him.
Actually, I would have liked to say
“my boyfriend Jack”
if everything had worked out the way I wanted it to.
Then it would have been
“oh yeah, so my boyfriend Jack
brought me rocks from Big Sur
no-  not because he’s cheap-
because he knows rocks are transcendental spirits
and knows how much I love them.”
And of course because he was my boyfriend
he would have called me his “baby muse” or his
“truthful youthful angelheaded hipster”…
something like that.

And I would have a pet name for him
like Roamy or Fubberhead or
Frenchie because we knew each other so long and
were so tight that I could have stupid nicknames for him
and he would really like it
it would be as though I was the only person
who could do that
except maybe for Allen Ginsberg or Neal Cassidy
though in public I would just call him “Jack”,
and sometimes “my friend Jack”
so that people would never guess how
intensely intimate we really were.

but when he wasn’t around and I was talking to my
friends about him I would have said
“yeah, the much older guy with a pot belly
who follows me around
and writes me long love poems from Florida
where he lives with his mother…you know
the Canuck guy with the mother thing,
the one with the thick wavy hair
who can really kiss…you know
the guy who wrote ON THE ROAD!”

And of course, I would never be taken
on the road with him,
since he needed to do that kind of research
for his books without me,
and it would be better anyway
when he got back and
Of course, when we were alone then,
I would never call him anything but “Jack”,
or sometimes “Kerouac” if I was trying to prove a point.

Calling him Kerouac would mean
that I was not just some kid with a crush on him
but a real woman who got angry
when he let her to walk to the subway alone at 3am.
which he would occassionally do when he
got really drunk.

Then there would be what I would call him
when I was ready to break it off
because of course he would want to be my teenage idol
for all of his middleaged life
and would never break off with ME
so I wouldn’t want to bring
too much attention to that moment,
I would just call him “Jack” then,
“Jack, it’s me” when he first picked up the phone
….and then I would call him
“My French Canadian roamin-eyed blue-eyed bum,
“my movie star-lookin wordsmith extraodinaire
with a backpack and some trail mix,
“my powerhouse quarterback
with a dime to call home in his pocket
to let his mother know he was allright”…

When that time came, I would say
“My beautiful perfect older man lover,
I got other roads to rail and besides
I’ve got to go to college and get a real boyfriend
that my mother says doesn’t look like my uncle”.
“And I love you Jack and especially
everything you ever wrote,
you big American icon with those big American icon arms.
But its not fair that your mother still thinks
I’m Allen Ginsberg’s roommate
so this has got to end…be sensible.
I’m just too young to be tied down
and you hate Jimi Hendrix anyway.”

“So Jack, let’s be friends and when I call you
‘my friend Jack’, it’ll be for real and forever
and I won’t have to worry about sounding
pretentious in front of my friends
or feeling grungy sleeping on your dirty sheets
and then you can call your mother
anytime (and for any reason)
even when I’m in the room.