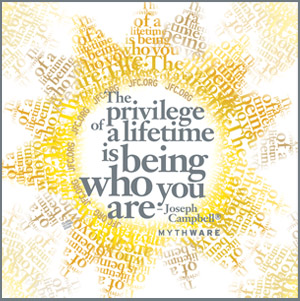 The pitfalls of working as a communication designer in the non-profit world have been well documented (I think). I even wrote an article for a trade magazine years ago in an effort to help younger designers avoid the holes on that street. (See link at the end). But things have actually improved since I wrote that list of warnings to the wise; and while I can’t say that the value of graphic design is better understood by your everyday straphanger, it is certainly more visible. And non-profits, like everyone else, see it as a way to send their message out to the world. Possibly more than ever, they are beginning to see that non-profit doesn’t mean poor image.

My latest experience with the Joseph Campbell Foundation is the case in point, and it has been a truly wonderful one, I confess. My long history with non-profit work, years of struggle with budgets, Boards, Directors and “too many cooks” in the proverbial Do-Gooder kitchen evaporated with one phone call. Pinch me but it happened.

I was given the task of creating the Foundation’s “product” line, a series of gift items that would represent the teaching of Joe Campbell. The Foundation is well-run, but like all Foundations, non-profits, etc., it runs on the good graces of members, grants and donations and a lot of not-for-pay work that staff puts in, after their “regular” jobs. It’s also actually run by very few humans, though from the looks of it, this can be hard to believe.

Maybe it’s the subject matter, the ultimate message that Campbell communicated about each of us as our own personal heroes (a truly original message when it surfaced in the 70s) that pulls this group along so well. “The Hero with a Thousand Faces”, Campbell’s famous work, inspired me and so many others (like George Lukas when he created “Star Wars”). Maybe it was the people I dealt with, who treated me with respect and kindness and actually expressed appreciation for what I was doing. Whatever the ultimate reason, I have seen the light at the end of the non-profit tunnel, and this one at least, seems pretty well lit.

Since my creative work focuses primarily on the word as image it was pretty exciting for me to work on this. With this initial group, I wanted to remain simple, clean, direct. And of course I had a million ideas, but I purposely pulled myself in so that I could at least get an initial group up and running. Joe Campbell said a lot of things that have become part of our pop culture, but not everyone knows that he was the one who said “Follow Your Bliss”. He said a lot of other stuff too, so there’s plenty to work from I’m pleased to say.

I don’t even mind the fact that I have to tell my younger friends who he was…Campbell was “just” a teacher. He was a professor at Sarah Lawrence, a scholar of course, stuff that doesn’t make front page news. But Bill Moyers put him on a lot of televisions in the late 1980s in hours of engaging conversation with “The Power of Myth” and his passion for the mystical stories of the world began a kind of cross-cultural revolution that America had never seen before. Even my corporate clients were talking about him at the time.

While I begin a new group of Campbell quotes and sayings, I’m happy to be working for “just” a teacher. To me, teachers are the real heroes of our culture, so overlooked and underestimated. When the world gets set straight someday, we’ll see that the folks we sit with in classrooms when we’re young especially, who give us new ideas and new horizons to imagine, are creating the heroes of the future; they really have the power to make a deep difference in our personal lives. I know my teachers have. In the meantime, I’ll give this next batch my most inspired shot and hope to have you visit the store online. There will be more to come soon. Here’s the link so please check out the stuff:
http://www.cafepress.com/joseph_campbell